Machine learning algorithm require huge amounts of data to train to usable levels of accuracy. In the context of vehicle aerodynamics, the method of choice for generating base-truths is CFD. CFD is however computationally expensive, especially for the levels of accuracy typically required for automotive aerodynamics. The CFD process consists off several different steps, all of which can be enhanced to improve the performance of the prediction. 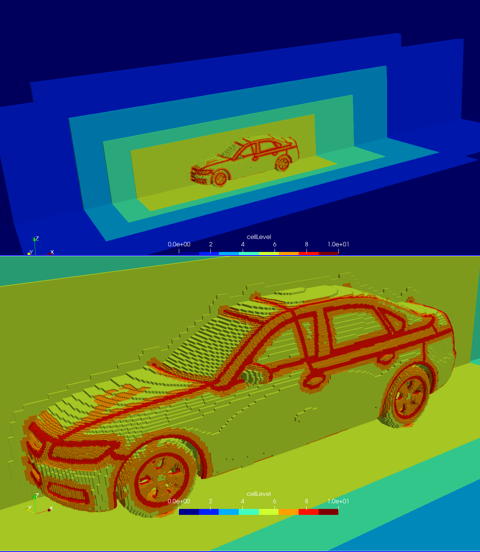 High fidelity CFD calculations require large meshes with complex shapes and topology. With the accelerated solers developed during the program, the mesh generation becomes the most expensive part of the process. To alleviate this bottleneck, we employ state-of-the-art OpenVDB level-set libraries to accelerate surface handling and volume mesh generation. OpenVDB exploits a very fast and efficient data structure and is the de facto standard for volumetric data handling in the visual effect industry. Preliminary results suggest a performance gain of up to 10 times.

Choosing realistic initial conditions for aerodynamic flow fields can lead to significant improvement in solution times. A reasonable option is to map results from a similar case to provide a good starting point. A new mapping algorithm was introduced to accelerate performance by more than an order of magnitude. Machine learning classification algorithm is used to select the source case with the closest feature vector to the target case. This in combination with wall distance mediated smart mapping, provides initial fields with exceptionally high correspondence to the eventual results, resulting in average solution time reduction in large DoEs of 33%. The enhanced search used in the mapping is also employed to accelerate spatial data sampling.

Block coupled solution algorithms are more complex and memory-intensive than traditional solution methods, but offer the potential for much higher performance. Previous experience in this context was leveraged to develop a new block matrix solution system that can reach a converged state 2-3x faster than heavily optimised traditional segregated methods. Overall, the new toolchain will execute a large design of experiments roughly 3 times faster than was possible before, saving hundreds of thousands of core hours and months of execution time during the project alone.

A framework that gathers up to 10 mean flow parameters and the R tensor from RANS and DNS simulations has been implemented in order to train the PIML model. Inherently, it is capable to use the training data independent of chosen cartesian frame, geometry, CFD flow domain sizes etc. if each grid cell used in the training phase has exactly the same ML input and output parameter dimensions.

The initial results from PIML framework shows good agreement of the predicted turbulent stresses as compared to the DNS results as illustrated in the below figures with contour lines at exactly same magnitudes of R. The framework is trained using the 2D DNS simulations of backward facing step cases at two different flow Reynolds numbers, which then is used to predict the R tensor over a backward facing step case with flow Reynolds number difference of 8.3% as compared to the training database. 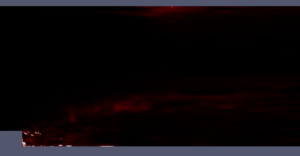 (d) Error between DNS and PIML 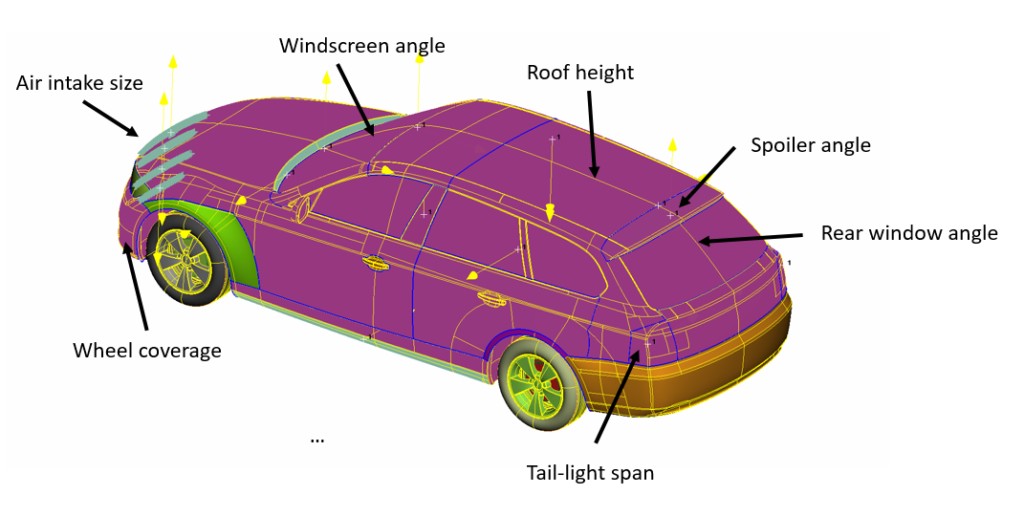 Geometry parametrization of the external shape of the vehicle is a key point in the aerodynamic optimization process: this stage, required for the generation of different shapes that will feed machine learning and optimization algorithms, needs to be as fast and robust as possible, ensuring always good quality geometry to be analyzed by CFD simulations. To overcome these possible bottlenecks, an automated parametrization tool has been developed and tested on a 3D-DrivAer model. The utility is able to generate up to twenty “standard” morphing parameters, such as spoiler inclination, windscreen angle, rear-end taper ratio, …

The tool has been used by UPSCALE partners to parametrize three different kind of vehicles: a Volvo full electric XC40 SUV, an FCA 500e full electric city car and a Volkswagen hybrid Jetta limousine. These models will be used as test cases to validate the aerodynamic optimization process driven by machine learning techniques on actual production vehicles.

Illustration of the POD+I method: Shown are the pressure POD modes. Their linear combination with suitably interpolated POD base mode coefficients âj serves as the pressure prediction for an unseen geometry represented by the parameter set x^* (reproduced from [1]).As a baseline reference for the benchmarking of the Neural Network-based prediction methods to be developed within UPSCALE, we decided to apply the well-known deterministic “POD+I” paradigm (Proper Orthogonal Decomposition + Interpolation, to the 2D-DrivAer test case provided by the UPSCALE partner CRF. Since the interpolation part of POD+I suffers from the “curse of dimensionality”, it was an open question, if this method delivers results of satisfactory accuracy also for this 14-dimensional test case. But preliminary results indicate that the errors in the predictions of fields and coefficients are comparable to those encountered, where a 6-dimensional car test case was treated with the same approach.

Aerodynamics ROM based on universal parametrization 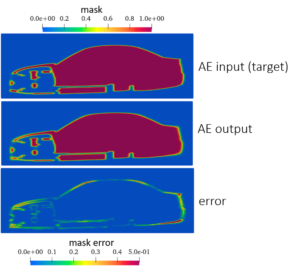 A state-of-the-art autoencoder (AE) is employed for automatic parametrization of the vehicle geometry. The autoencoders are considered to be a self-supervised form of ML and they typically consist of the encoder, where the input information is compressed into a lower-dimensional space (latent), and the decoder, where the output is reconstructed from the latent space. The developed AE shares the attributes of Principal Component Analysis, i.e. the parameters are hierarchical and independent while maintaining non-linearity at the same time. The decreasing importance of the parameters is achieved by performing iterative training and thus, the latent space is incrementally increased by 1 feature. To achieve independence of the latent space parameters, a covariance term in the loss function is introduced. The input is the same as the output and it is the sampled geometry mask, either in a scalar or in a level-set field. Overall, the AE reconstructs the input with an error of 3-4%. As an alternative to the classification algorithm for predicting the drag coefficient, the AE latent space can be used in a regressor method. The error in the latter has been documented to be 5-6%.

The pressure and the velocity flow fields around the vehicle, as well as the drag coefficient, are predicted by utilizing machine learning (ML) approaches. In order to train the artificial neural network (ANN), a database, which consists of several variations of the baseline geometry, is generated. CFD analysis is performed for each sample of the database and therefore, the volumetric flow fields and the drag coefficient are calculated, which will be later on used as targets for the corresponding ML algorithms. Regarding the volumetric flow fields prediction, a U-net architecture is used, whereas the drag coefficient is predicted by a classification algorithm. The input for both algorithms is the sampled geometry mask, either in a scalar or in a level-set field. The pressure-flow field prediction is 93%-97% accurate, the velocity vector field is above 99% accurate, whereas the drag coefficient is around 97% accurate.

Macro-scale models combine the mechanical behaviour of all single layers of the active cell material to a fictitious homogenous material.

This leads to fewer elements and a higher time step. These models are therefore suitable for calculations in higher production levels such as battery module, battery pack and full vehicles. A short circuit detection can only be based on empirical criteria. The macro-scale approach will be used in the UPSCALE project with a validation based on results of the meso-scale model.

Every single layer of the active cell material is homogeneously modelled as a single component. By this method, an electrode is build-up out of the three layers of active material, current collector and active material. This leads to a highly detailed model which allows the assessment of the safety-critical separator layer. Depicting the actual physical structure of a cell though leads to a numerically expensive model with a high number of small elements with a consequently small calculation time step and very long calculation time. Due to these facts, meso-scale models are not suitable for the implementation of full vehicle crash simulation models. Advantages of these models are their potential accuracy and short circuit detection based on physical material parameters whereby the cell short circuit can be localized down the involved layers and characterized by the specific material combinations.

An EV battery pack includes modules and cell components and cannot be modeled as a detailed FEA model given the number of elements needed and time step requirements of explicit scheme in rapid dynamics. Thus, an equivalent ROM rigidity model is built as an alternative of the pure FEA homogenized model. The reduced-order model is built via a model learner based on Incremental Dynamic Mode Decomposition (iDMD) and Proper Orthogonal Decomposition (POD) where only the envelope (shell elements) of the cell is considered and to which an

“equivalent rigidity” is computed at each time step to replace the jelly (solid elements) removed. This equivalent rigidity links the kinematics fields (displacements) to the reaction forces. An executable is delivered in D3.2 for the two stages: (i) training stage (ii) online stage. Due to the large number of unknowns that we are dealing with (~10k), a very large number of data would be needed to improve the model learner: from real loadings coming from car crash enriched by the parametric solution built via sparse PGD and elementary solicitations.

FEA cell models have been generated within the UPSCALE project at meso and macro (homogenized) scales. From the macro-scale stresses and strains can be computed along with the battery cell. From the meso-scale, the battery short-circuit risk can be calculated. However, to get an accurate a battery short-circuit risk, the meso-scale computation is time and resources consuming and incompatible with full EV crash simulation.

Thus, a data-driven machine learning model is built based on the stresses and strains at the macro-scale and the battery short-circuit risk at the meso-scale for the training part. The online application of this data-driven model can predict the battery short-circuit risk based only on stresses and strain histories of the macro homogenized model. For training the data-driven model risk prediction, tens of unitary load cases are applied and measured on the cell at macro and meso scales. For better accuracy, different short-circuit risk-prediction models are trained independently for several classes of load cases. However, this method implies knowing the load case prior to predicting the short-circuit risk. This can be achieved by a first classification data-driven machine learning model that first predicts the load case. The combined approach enables a cell predicting the short circuit risk within 5% of the very detailed model with a computing cost compatible with full EV crash.

UPSCALE is the first EU-project that has the specific goal to integrate artificial intelligence (AI) methods directly into traditional physics-based Computer-Aided Engineering (CAE)-software and –methods. END_OF_DOCUMENT_TOKEN_TO_BE_REPLACED

The CRF team explains in this short interview a few key concepts for the Work Package 2: AI-based designs for aerodynamics. END_OF_DOCUMENT_TOKEN_TO_BE_REPLACED

ENSAM ParisTech answers some questions about Model Order Reduction and its application and implications in the project. Continue reading!

END_OF_DOCUMENT_TOKEN_TO_BE_REPLACED

The Vrije Universiteit Brussel  explains us some of the keys about battery thermal management and how the consortium is working in this field  to achieve the he objective of developing a reduced-order battery thermal model.

END_OF_DOCUMENT_TOKEN_TO_BE_REPLACED

In this interview, you will be able to discover the main activities and actions to be developed and the challenges and opportunities posed by the UPSCALE project.

END_OF_DOCUMENT_TOKEN_TO_BE_REPLACED

What is the UPSCALE project about? In this interview, the team of Applus+ IDIADA, project coordinator, tell us about the objectives and key aspects of the project.

END_OF_DOCUMENT_TOKEN_TO_BE_REPLACED

Read on to discover more about the work done and the remaining challenges in this interview with  Dr. Eugene de Villiers.

END_OF_DOCUMENT_TOKEN_TO_BE_REPLACED

The project partners of the UPSCALE project have gathered at the premises of CRF in Torino (Italy) on the 13th and 14th of November 2019 for the Third Project Coordination meeting. END_OF_DOCUMENT_TOKEN_TO_BE_REPLACED

The artificial intelligence (AI) is changing the functioning of the automotive industry. END_OF_DOCUMENT_TOKEN_TO_BE_REPLACED